“After getting married in 2017, I enjoyed my honeymoon phase and ate out a lot and enjoyed being married. Little did I know, I gained roughly 25 pounds in a YEAR! I NEEDED to drop this weight somehow. I worked out, changed my diet and spent SO MUCH money on trying to find the protein shake that works for me.

I tried a lot, but each and every single one had something in common. They have that nasty chalky taste. I stopped using milk and used water instead. Still an awful taste, even when fruit was added. Now, when Norma introduced me to P-TEIN, I was worried I was not going to like it. PROTEIN SHAKES WILL ALWAYS TASTE CHALKY! I was hesitant, I have not tasted a vegan pea-based protein before. I was worried that this protein powder will be an addition to the others I have that are currently going to waste. I just do not use them anymore.

I had completely given up on protein shakes and failed to find ONE, JUST ONE, that does not taste chalky.

Is it possible to find a protein powder that simply tastes delicious?

IT IS ABSOLUTLEY POSSIBLE! Norma whipped up a batch of her POPEYE smoothie, but little did I know, there was NORMA’S P-TEIN in my shake. It does not taste like chalk, nor does it taste bitter. All you need are fruit, spinach, water and BLEND. You will not drink it, but instead DEVOUR IT!

Going on a week with using NORMA’S P-TEIN and I can honestly say, this works. STOP WASTING MONEY and buy NORMA’S P-TEIN. You will not be disappointed. You can finally enjoy a protein shake with NORMA’ P-TEIN.

So say YES!” Thanks Norma! 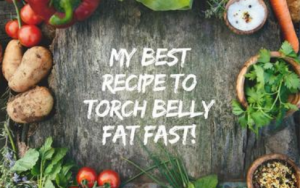 This recipe uses (5) of the Top Ingredients Proven to TORCH BELLY FAT AKA "Belly Busters!"